Road Trip to Raleigh – Part One

Many of you know that New Bern served as the first state capital and home to the first capitol building, Tryon Palace. On my most recent excursion to New Bern, I had a business side trip to Raleigh. Finally, the opportunity to experience the “other” North Carolina capitol building. For those of you who follow this blog, you likely realize it will be my number-one stop during free time.

First, a brief history lesson as to why Raleigh was favored over our beloved town. As the latter part of the 18th Century progressed, so did the population growth moving westward. The fact that New Bern is perfectly close to the Atlantic and at the convergence of the Trent and Neuse Rivers made it even easier to access during the American Revolution. Oh yes, and Tryon Palace basically burned to the ground. It made sense to have the capital of the state be in a more centralized location. 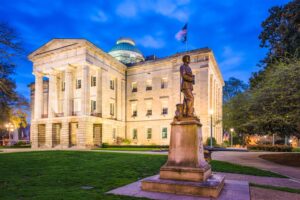 The State Capitol Building in Raleigh is picture-perfect. Literally, as this is from a postcard. The day I visited was too cloudy for a good shot.

While there was restoration work being conducted on the capitol during my visit, that did not stop the opportunity to experience historical magnificence. The exterior is Neoclassical architecture, with massive columns, domed rotunda and Greek-like design. George Washington seemed to be everywhere, four times in fact. I had to ask a guide as to why in one statue George is in Roman uniform. Apparently, the sculptor was Italian and felt it displayed him with extreme strength, courage and honor. Other highlights were learning the capitol served as North Carolina’s first public library, and to this day showcases a massive collection due to many returned books checked out during the 1830s fire (see next paragraph). The last notable was the monument outside of three presidents: Andrew Johnson, James Polk and Andrew Jackson with a horse. All three were born in North Carolina. However, only Jackson being on the horse could offer some hidden meaning.

The building I toured was not the first one in Raleigh. The State House (the building erected once Raleigh became the capital) was burned down in 1831. For both New Bern and Raleigh, I was reminded that North Carolinians have amazing strength to rebuild, restore and renew. And that should be with three capital Rs!

Jackie B2020-01-27T12:42:34-05:00January 27th, 2020|Blog, Uncategorized|
Toggle Sliding Bar Area
By using this website, you agree to our Privacy Policy. California residents: See our CCPA Privacy Notice for details on what personal information we collect and for what purposes. OK