Thales Academy to Open Campus at West New Bern in 2025 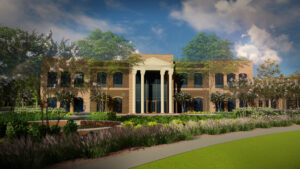 Rendering of Thales Academy at West New Bern. (subject to changes and refinement)

Thales Academy New Bern will initially offer grades Pre-K–3rd for the inaugural school year, with plans to add a grade each year to grow to a full kindergarten through eighth grade campus (and perhaps eventually through twelfth grade, given adequate enrollment interest).

“We are honored to have the opportunity to bring our high quality, affordable private school education model to the New Bern community,” says Bob Luddy, Founder and Chairman of Thales Academy. “We pride ourselves on offering a rigorous, classical education that incorporates character formation in all grades and maintains affordable tuition. We are thrilled to share Thales Academy with families in eastern North Carolina.”

The Thales Academy New Bern campus will feature a modern, yet classical, aesthetic, allowing students to learn in an environment modeled after beauty and order. Large floor to ceiling glass windows will flood classrooms with natural light, colorful murals of the Founding Fathers and famous inventors will adorn the hallways, and a spacious playground with artificial turf will welcome students each day. The campus will be outfitted with excellent safety and security features, including controlled access doors, security cameras throughout all areas of the school, and background check systems for all visitors. Advanced HVAC units that supply up to 100% outdoor air will provide superior indoor air quality. Ensuring students are well-versed in technology, the new campus will have Apple TVs in every classroom, as well as shared iPad and MacBook carts. The Thales Academy New Bern campus will be open to all students and is not limited to West New Bern residents.

“We are very thrilled, not just for West New Bern but, for the Greater Craven County children who will have an outstanding educational choice in Thales Academy,” comments Rosemary Fagler, Economic Development Manager for Weyerhaeuser. “Thales is going to do well in Craven County, and so many children’s lives will be changed at Thales Academy New Bern through the power of education.”

Thales Academy currently operates fourteen campuses in North Carolina, Tennessee, and Virginia, instructing around 6,000 students, and continues to add campuses as demand for its successful school model grows, including its first South Carolina campus coming in 2024. Student formation is designed to develop the entire person, which is achieved through a research-based teaching method, best-in-class instructors, and a culture that embodies traditional values. Tuition varies slightly by campus location and grade levels, ranging from around $5,000 to just over $6,000 per year, and scholarships and payment plans are available.

Hallmarks of Thales Academy include: rigorous, college-prep academics that emphasize learning to mastery; character formation; real world skills development; personalized attention; and affordable tuition with no extra fees or fundraising. In addition to the low cost, other tangible benefits include: a stable, proven educational approach, a consistent calendar, and a simple dress code. The school strives to cultivate critical thinkers by teaching how to think, not what to think; fostering often forgotten skills such as writing and grammar; and developing confident leaders with strong character. Families interested in Thales Academy may learn more and submit an interest form for the New Bern location at ThalesAcademy.org. Applications for the New Bern campus’s inaugural year will open in September 2024.

Thales Academy is a K-12 college preparatory network of schools that assists parents in cultivating virtuous, critical thinking, compassionate individuals. Thales Academy fosters high standards of accountability, academic achievement, and civic responsibility through the use of a rigorous curriculum, character development, and technical and non-cognitive skills development. Thales Academy seeks to deliver the highest quality education at the lowest cost to parents and the community. Students are well-prepared for success in college and beyond, consistently outranking nationwide peers on objective, standardized tests and mastering skills that last a lifetime.