I had just a few hours left in Raleigh, and I had a couple of stops left on my agenda. Having spent the morning touring the Capitol Building and the Museum of Natural Sciences, I had worked up quite an appetite. 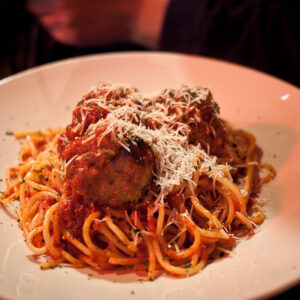 Oh my gosh! How can such a simple dish taste so decadent?

A New Bern friend provided a top recommendation for lunch, a restaurant named Gravy. Was this to be a homestyle cooking café? Once I came upon the restaurant, I realized gravy referred to homemade pasta sauce.

Gravy is everything you desire in an Italian restaurant. Aromas of garlic, fresh bread and seasoning filled the air. As plate after plate passed by, I wondered if the spaghetti and meatballs I ordered was too basic. Once my plate of pure heaven arrived, that thought quickly disappeared. It was delicioso! A pound may have been gained in one hour, but it was well worth it.

My last stop was to visit the North Carolina Museum of History. With my parents being native Tar Heels, I felt it was my duty to learn more about our favorite state. Since time was limited, I focused on one main exhibit, “The Story of North Carolina.” 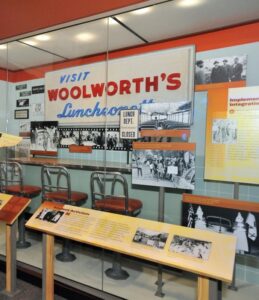 The North Carolina Museum of History provides the opportunity to experience our state’s memorable moments.

As you enter, you feel as if you are on the Carousel of Progress ride at Disney World. As you go from one century to the next, you learn more about the state through antiques, artifacts, informative narratives and hands-on activities.

Three displays stood out in the exhibit. One, Blackbeard was a real person. I thought his story stemmed from legend. Apparently, his ship wrecked off the North Carolina coast, and several things were recovered, including a cannon. Two, I saw the next best thing to being in Kitty Hawk. The exhibit offers a life-size replica of the 1903 Wright Brothers’ “plane” used in the first flight. Three, and perhaps the most impactful, was the replica of the 1960 Woolworth lunch counter sit-in during the Civil Rights Movement.

In addition to the Museum of Natural Sciences and Museum of History, Raleigh boasts several other museums, including ones for contemporary art and kids. While Raleigh may be the second city to house the state capitol building, it’s the first for museums to call home.