Goldsboro, A Gold Mine for Nostalgia

As I have said before, one of the many cool things about New Bern’s location is its proximity to other cool places. Just 60 miles west up the road is Goldsboro, a small city that is the epitome of North Carolina.

When I was younger, we would travel from Florida to visit my grandmother, who lived in Goldsboro. I thought it was time to visit the place that held fond childhood memories. Many of my favorite places are no longer there, but the beauty of this town remains, as evidence by Beech Street. Beech is the street my Granny lived on, and a smile came to my face as I drove by her old house! 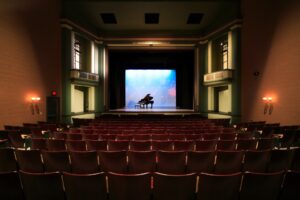 While the Paramount Theatre was rebuilt, the look of the interiors remained.

It was time to do some sightseeing around Goldsboro. First stop was downtown. I recall the first roundabout I ever went around was in Downtown Goldsboro. Main Street is everything you would imagine: wide sidewalks, boutiques, old-fashioned coffee shops and friendly faces. Naturally, when I saw the sign for Norma’s, I had to stop in to see the boutique we shopped in when I was young and where Granny worked in her later years. I came upon the Paramount Theatre, where I saw movies every summer. I learned it burned down years ago, then was rebuilt and now serves as an entertainment venue.

Thank goodness I had thrown in my sneakers for my last stop. I headed down the road to Cliffs of the Neuse State Park. The name says it all, as this park has incredible cliffs overlooking the Neuse River. The beautiful setting has five hiking trails to explore the forests along the water. While it was too cold to take a dip in the 11-acre lake, I hiked the two-mile (each way) Lake Trail, and saw some amazing flora and fauna.

My day in Goldsboro brought back memories of my childhood while creating some new ones. It was definitely a golden day!