3,000-acre development in New Bern could be sign of major growth ahead for NC coast 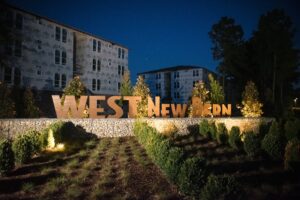 For basically any other company, the West New Bern development would be considered massive. But timber giant Weyerhaeuser owns 540,000 acres of timberland in North Carolina alone.

“The term massive, I guess it just depends on scale,” said Rose Fagler, economic development manager for Seattle-based Weyerhaeuser (NYSE: WY), which has a real estate business unit that has developed several master-planned communities in the Southeast.

Still, West New Bern will help reshape Craven County and the surrounding area at the mouth of the Neuse River along the North Carolina coast. Phase I calls for up to 1,500 residences, as well as room for retail and restaurant space. The entire West New Bern development is slated to be 3,000 acres.

As the development gets ready to welcome its first residents later this year, Weyerhaeuser recently brought on CBRE | Raleigh’s Land Services and Retail Services groups to handle the marketing for the project.

Charlie Coyne, head of CBRE | Raleigh’s Retail Services group, said the team is looking at retail options for the community, such as groceries stores, restaurants, breweries and taprooms.

“Food and beverage is a big part of the first phase,” Coyne said. He added opportunities exist for small businesses looking for office space, as well as a large corporate office. “There are 3,000 acres, so there’s a lot of room.”

Fagler said there’s space for industrial development in Phase II, as Weyerhaeuser owns land that wraps around the Craven County Industrial Park – and the park is running out of capacity.

As for residential development, work on homes is progressing quickly.

She added that conversations are ongoing with other builders about the rest of Phase I, which she estimated would be built out over the next 10 years.

Barry Bowling, head of CBRE’s Land Services group out of Raleigh, said interest in the New Bern area has risen over the past 18 months.

“With some conversations I’ve had with some other developers down there, they’re seeing heightened migration due to Covid,” Bowling said. “It could be families. It could be retirees. If you look at some of the stats that I’ve seen, folks are moving from Raleigh, Wilmington, New York, California – it’s all across the board.”

Raleigh is about a two-hour drive to New Bern today. But Bowling noted several road improvements planned along the route will make Raleigh and New Bern better connected and therefore West New Bern more appealing. One of the projects would convert U.S. 70 to an interstate, I-42.