When I visited New Bern for the first time in 2017, I heard stories about this really cool raft race on the Trent River. Apparently, it was a big deal for the city back in the 1970s and 1980s. Locals told me it drew tens of thousands of people. So why wasn’t it still going on, I asked. I heard a number of different reasons from the same number of people, therefore who really knows. It was just one of those unanswered questions. 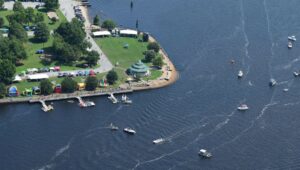 Fast forward to June 2018, when much to my surprise and delight, I heard The Great Trent River Raft Race was being resurrected. The town was abuzz with all the festivities planned by the New Bern Chamber of Commerce. I was excited to see what everyone was talking about–these homemade crafts of all shapes and sizes, built by the participating teams. I arranged for my next visit to New Bern to coincide with the race. As the race day approached, the city was full of energy, excitement and enthusiasm. And yes, the race itself was a blast. However, what was even more amazing was how this event created such an electrifying “coming together” of the community. That is what always stands out about New Bern. The community spirit is simply incredible.

This Saturday is the second annual of the return of The Great Trent River Raft Race. Union Point Park is the site of the festivities, including food and beverages, music, vendors, kids’ activities, and of course, the races. The highlight is seeing the creative, homemade rafts and crafts that range from silly to innovative make it across the water.

West New Bern and Weyerhaeuser are each First Mate sponsors of the race. When you attend either the Rockin’ on the Rivers Kickoff Concert on June 21 or the race on June 22, be sure to look for their banner!

Jackie B2019-06-19T13:32:37-04:00June 17th, 2019|Blog, Uncategorized|
Toggle Sliding Bar Area
By using this website, you agree to our Privacy Policy. California residents: See our CCPA Privacy Notice for details on what personal information we collect and for what purposes. OK