Rocky Mount, Oh My! – Part One

Of all my childhood travels to Eastern Carolina, along with my frequent visits to New Bern, I had yet to head northwest up the road to Rocky Mount. As with the other cities and towns visited in North Carolina, this one had quite a few surprises up its sleeve.

I was pleasantly surprised to learn that Rocky Mount, population of about 55,000, is home to several breweries. I also learned that Rocky Mount Mills houses many of them. Actually, it is a brew incubator program with Nash Community College, where students learn the brewing business while earning their AA degree. They had me at beer, but simply put, this place is really cool. I was able to tour the different incubator warehouse spaces and learn about the intricate process of making beer. With all this newfound knowledge, I had worked up a thirst and appetite. Luckily, there are tap rooms and restaurants on-site. I got my fill at TBC West (Tarboro Brewing Company) Tacos & Taproom. Yes, tacos are in the name, however go for Nana’s Ribs, a short-rib delicacy that does not disappoint. 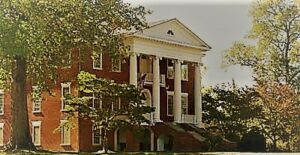 I loved touring this beautiful home, restored to its 19th Century splendor.

Being a history buff, I had read online that Stonewall Manor was a must-see on the itinerary. However, I also read a couple of stories about ghosts inhabiting the home and grounds. I am sure that intrigues some of you, but me, not so much. I was not going to let a few haunts stop me, so off I went to see the place. This home is indeed spectacular, beginning with the granite wall as you approach it (and therefore the name). It was a plantation home right in Rocky Mount for the Bunn family, the most prosperous planters in the area. The manor has been magnificently restored to 19th Century living. Everything from the ornate furniture to the bone china brought me to another place and time. As for the ghosts, I did feel a chill pass by me, but I was determined to think it was cold air from the floor vent.

I had more Oh My moments ahead, as I stayed the night. For the rest of my adventure in Rocky Mount, stay tuned for next month’s post!

Jackie B2019-12-23T13:21:14-05:00November 13th, 2019|Blog, Uncategorized|
Toggle Sliding Bar Area
By using this website, you agree to our Privacy Policy. California residents: See our CCPA Privacy Notice for details on what personal information we collect and for what purposes. OK