New Bern Is Easy to Bear in Mind

As trite as this may sound, the first time I visited New Bern, North Carolina, I knew this was a special place. There are many words to describe the character of the city—historic, modern, charming, eclectic, welcoming, quiet and active. These descriptives may seem to be somewhat contradictory, yet that’s why New Bern is so unique. 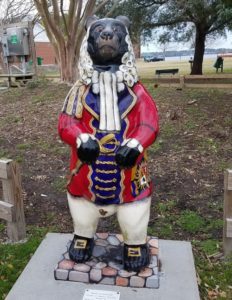 This was the first bear I encountered on my initial visit to New Bern.

The city’s uniqueness became very evident when I came upon my first Bear. No, not the real kind, thank goodness. It was a themed statue named “Bearon de Graffenreid,” which pays homage to New Bern’s founder, Baron Christoph de Graffenreid. Soon, I saw themed bear after bear. Ah, yes, Bern is translated to bear from the Swiss dialect.

Doctor, lawyer and farmer market bears, oh my! The bears were everywhere. Themes were obviously selected based on the location of the bear. It is safe to assume the bear titled “Pub Cub” was situated in front of Publix, for example. One of the riverfront locations was home to Captain Black Bear’d.

I had to know—where did all this bear love come from? Ah, yes (again), New Bern is a city with an abundance of community spirit. New Bern celebrated its 300th anniversary in 2010 and as part of the celebration, businesses commissioned local artists to create fiberglass, ceramic bears in an array of themes. There are now over 60 themed bears situated throughout New Bern. Have I seen them all? Not yet, but I am “bearing” down to do so!