On one of my recent trips to New Bern, I blocked out extra time to visit Washington. The town in eastern North Carolina, and yes, it is named after the first president.

I remember visiting Washington many years ago to see my Great-Aunt Ruth. I recalled the quaintness as if I was were in Mayberry from The Andy Griffith Show. On this visit, I half-expected to see the likes of Andy Taylor or Barney Fife.

The drive to Washington is an easy one, about 36 miles up north on U.S. 17. The town boasts a scenic waterfront along the Pamlico River. I found myself moseying around the charming downtown area, strolling from one specialty shop to another. I collect antique teacups and saucers, so naturally when I saw the sign for South Market Antiques, it was just a matter of getting me out of there without a carload! It was truly enjoyable meeting locals and hearing about the town’s history. This Washington was indeed the first town in the country named after George, so it is often referred to as Little Washington or the Original Washington.

How Do You Eat Southern?

Word on the street is you cannot go hungry very long in Washington, as I received several recommendations for a lunch spot. I settled in at Down on Mainstreet (not a typo). It did not disappoint, with its delicious Southern-style entrees. While I chose to quickly skip over the frog legs and fried dill pickles menu listings, I indulged in the shrimp with fried-cheese grits. Somehow, I managed to save room for dessert with the amazing pretzel brownie. Warning: do not even look at the menu if you want something healthy!

An Aquarium or an Estuary? 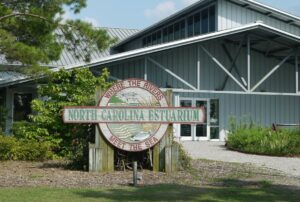 Do not pass up an opportunity to visit the first-ever Estuarium!

Before I left this quaint town, I had to stop by the North Carolina Estuarium, as I had no clue as to what an estuarium was. Now, I may be able to beat Jeopardy contestants if the answer, “A place to inform you about marine and plant life where river water and saltwater meet” comes up. If you are in or near Washington, take an hour or so, even if it is to simply say you have now toured an estuarium.

From this snapshot of the town, I have a good feeling Washington is a great place for a bed-and-breakfast weekend or a holiday-time return. It may be little, but it is mighty fun!

Jackie B2019-08-18T17:05:00-04:00August 15th, 2019|Blog, Uncategorized|
Toggle Sliding Bar Area
By using this website, you agree to our Privacy Policy. California residents: See our CCPA Privacy Notice for details on what personal information we collect and for what purposes. OK